– Kentucky Derby winner, hat on display at the museum for one year. 2009

–  Articles in various newspapers as well as television appearances on City Tv, Shaw and CBC the National. Appearances occurred between 1994-2010 for fashion events Maria produced as well as all art and hat related appearances. 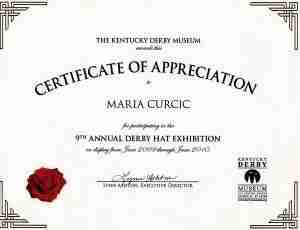